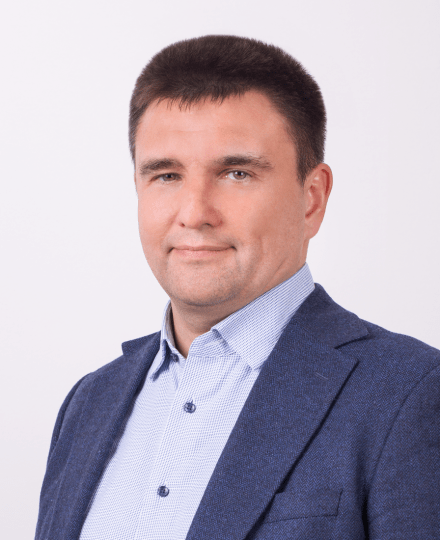 Pavlo was born on December 25, 1967. He studied at the Kyiv School of Physics and Mathematics №145. Graduated the Moscow Physical-Technical Institute by specialty "Physics and Applied Mathematics", Faculty of aero physics and space research. As a scientist he worked at the Paton Institute of Electric Welding, but soon switched to the diplomatic service.

At the Foreign Ministry, Pavlo dealt with the disarmament, nuclear and energy security, climate change and the consequences of the Chernobyl catastrophe. From 1997 to 2000 he worked at the Embassy of Ukraine in Germany, in 2007- in Great Britain.

Since 2008 Pavlo chaired the Department of the European Union at the Ministry of Foreign Affairs, in 2010 he was appointed Deputy Minister and was in charge of relations with the EU and the United States. In 2012 he became the Ambassador of Ukraine to Germany, and in 2014 - the Minister of Foreign Affairs of Ukraine.

Pavlo was the head of the Ukrainian delegation to the negotiations on the Association Agreement between Ukraine and the EU, initialed the document on behalf of Ukraine. He coordinated the process of granting Ukraine a visa-free regime.

Being the Minister of Foreign Affairs during the war with Russia, Pavlo worked on creating an international coalition to support Ukraine and receive military assistance and strengthening cooperation with the EU and NATO.

Pavlo reformed the Ministry of Foreign Affairs, introducing European standards instead of the old post-Soviet system. He promoted the positioning of Ukraine as an influential European country with global ambitions and a regional leader.